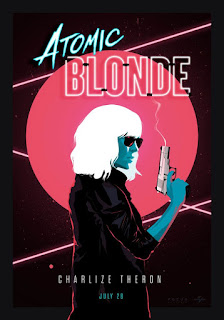 Atomic Blonde directed by David leitch, one of the co-directors of the marvellous sleeper sensation John Wick  is one film I had high hopes for. It looked fantastic with its retro inspired late 80´s look and soundtrack. Like a Luc Besson film of the 80´s. It still does. But a missed opportunity was squandered here I think. It could have been a wonderful movie with the level of worldbuilding of John Wick but set in East Berlin at the time of the fall of the Berlin Wall.

John Le Carré, a british writer of Cold War spy novels did that. Created all these mysterious organizations and shadowy characters that was and still is so compelling.  Spy stories invite to world building I think thanks to the levels of intricacies involved.

But what we are left with is a fairly superficial nonsensical spy nonsensical film, that tries to blend genres, but perhaps it was the two genres that never should be melded. The action film and the spy drama.

Action films are propulsive by nature, moving forward, creating momentum. Spy stories are reflective with its elliptic narratives, quite the contrary to action films. And this film is an example of how bad they mixed.

I once tried to mix red and white wine in the same glass. A hopeless effort and stupid  endeavour. They were never going to match.

So, what is the story?

Well, an East German defector with a list of spies needs to get across the border.  And Atomic Blonde ( I can´t remember her real name) played by Charlize Theron is tasked by the British Intelligence to get the list back and the defector.

That is basically the story, but it is hidden by pointless elliptic flashbacks told through an interrogation after the events and ends with an even more pointless twist. Spy stories usually have unexpected turns, but I found this one ill fitted.

But what do we have, if we can´t rely on a solid story? Well, we have  a soundtrack that at least deviates a lot from the usual nostalgic 80´s back catalogue, because a lot of these songs are German which frames the story very nicely. We also have the usual blue lighting commonly associated with late 80´s action films.

Since it´s a film directed by the co-director of John Wick, it is sprinkled with dynamic fight sequences throughout. I say, sprinkled, because unlike John Wick, this is not a very focused movie. John Wick- the character was a dynamic character with propulsion which fitted the narrative nicely. And the fights functioned well with the rest of the movie.

There is nothing wrong with the choreography here. In fact they are a highlight of a rather superficial effort. But Theron's character requires a rather more dynamic plot to suit her own dynamic presence.

In the end, we have a slight action film, with little to recommend it outside the phenomenal fight scenes. Charlize Thereon proves she can kick ass, but needs a vehicle to provide her so she can stomp the pedal and really go all in.

NINJA SHADOW OF A TEAR 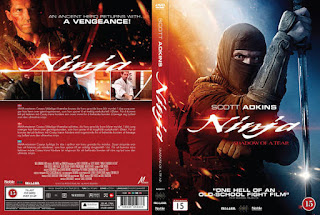 The original Ninja is a fantastic throwback to the Golden Age of Ninja-movies ( the 80´s). A ninja flick with the correct B-movie sensibilities only hampered by the lack of consistently awesome Scott Adkins fightingry. Ninja 2 makes up for it by being a simple string of fight set pieces. It lacks the strong ninja mythology pathos of the original but instead shows a dynamic pacing and quite frankly is never boring.

Apparently neither Ninja 1´s director Isaac Florentine or/and its star Scott Adkins were happy with the first outing. They thought it looked too cartoony so in this movie they adopted a more grounded approach to the fight choreography with the listing of Swedish stuntman/martial artist Tim Man ( a Swedish Ip Man).

It starts out, instead of a montage of ninja lore, with some outrageous WW2 propaganda footage that warns of Ninjas in the pacific. NINJA! BEWARE! This sets up the rather lacklustre plot that at least never hinders the enjoyment of the film.But some elements might be worth examining.

It feels less Ninja-esque than the original film but instead it really highlights Adkins phenomenal acrobatic skills as a cinematic martial artist, seldom has his skills been put to better use than in this, the Undisputeds not-regarding.

Scott Adkins plays American Ninja Scott Whatever. He is settling down with his Japanese wife, only to find her dead as he returns from some bullshit errand she sends him on in the middle of the night. He gets a visit from an old friend, Nakabara, played by Kane Kosugi. Old Friend who happens to have a dojo in the same country as the clues Scott finds out about his wife´s murderer leads him to. The same guy who purposefully throw some metaphorical  Ninja Dust in Scott´s brain by delivering some heavy handed exposition about the same ninja shit during WW2 that we encountered in the opening.

You shouldn't trust what you are being spoon fed is the gist of it. The opening propaganda film serves as a foreshadowing of the events to come. We laugh at the silly propaganda from the olden days but later when Scott gets blindsided by being spoon fed  some historical nonsense we see the idea of how little informed we are can determine how we act or respond. Scott knows shit about the history and cannot question anything he is emotionally upset by his wife´s death and goes on a quest of vengeance unquestioningly. Something we can learn  some very hard lessons about in this day and age.

So , Scott is being sent to kill a rival to his Old Friend which turns out to be a pretty unspectacular villain. The only thing mentionable about it is the second lieutenant, played by Tim Man who has perhaps the single best fight in the film with Adkins.  With the exception of the final showdown when Scott throws down with Nakabara. A true delight for fight fans.

The plot is pretty complicated compared to Ninja, but it also makes sense. The first movie introduced us to the idea of Ninja.  Part of being Ninja is being shadowy, shoving dust in peoples eyes, construct distractions.

Ninja-Shadow of a tear does all  that. But also advance the notion that Ninjas can create fake news, fake stories to construct how we see things. Beware of Ninja! It may not be strong on Ninja mythology, but it is strong on the implications of being a Ninja and being extremely current  and topical in how ninjas is being depicted for a 21st century.

Andreas Bengtsson
Home of my written gibberish. I dwell on many things, actioncinema, horrormovies and novels. Here I ponder and type my written feaces